In general, Americans don't eat enough fermented foods.  In other countries, fermented foods are consumed daily.  Aside from yogurt, we really don't have anything in our diets that contain helpful probiotics, which improve our digestion and overall health.  I came across a recipe for raw pickles that contain probiotics.  This recipe is easy to make and doesn't require much hands-on time. 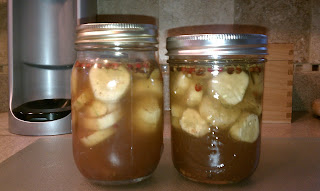 I didn't have pickling spice, so I ended up putting the following in each jar:  a bay leaf, a few peppercorns, a few cloves, a sprinkle of allspice, a sprinkle of cinnamon, a few pieces of fresh dill. 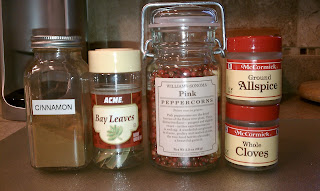 Combine all ingredients into one large canning jar or 2 smaller jars.  Close the lid tightly and shake well to mix.  Leave out on the counter for 3-4 hours.  Place in refrigerator overnight.  These will keep for a week or more in the refrigerator.
Posted by Laura at 6:11 PM