Dye to the Rescue

My sister-in-law had a nice pair of white Ralph Lauren shorts that got discolored.  She tried washing them a few times, but they remained yellowed.  I tried using Oxy Clean, Laundress Stain Remover, and even a bleach pen, but nothing worked.  I thought it was a shame to throw them out, so I decided to try dying them.  The shorts had navy blue anchors on them, so we thought a light orange color would look nice.  We used Rit powder in Tangerine for this project.  For a little over $2, I saved the shorts and they look like new. 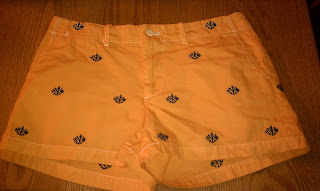 If you have anything was was "formerly" white and made of cotton, I highly suggest trying to dye it, rather than throw it out.  It will almost be like getting a new piece of clothing!  You can get a box of Rit dye at any Michael's craft store.  It's easy to dye anything in your washing machine.  Just make sure to follow your dye cycle with a cycle of hot water and a cup of bleach to prevent dying anything else you put in your washing machine!
Posted by Laura at 7:00 PM

Email ThisBlogThis!Share to TwitterShare to FacebookShare to Pinterest
Labels: Laundry