Since I've become gluten-free, spaghetti squash has become a staple around our house.  Not only is it healthier for you than pasta, but it's also delicious!

Place the squash cut side down in a baking dish and fill the dish with water.  Bake in a 400 degree oven for 45 minutes, until just tender.  Remove from oven and set aside to cool.

When squash is cool enough to handle, scoop out the spaghetti strands and set aside in a bowl or dish. 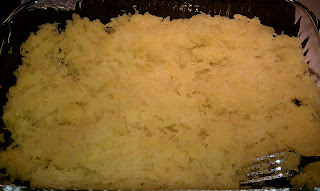 In a skillet, heat 1 tablespoon of canola, coconut or grapeseed oil over medium heat.  Add onion, bell pepper, and garlic.  Cook for 5 minutes.  Add in ginger, peas and carrot and cook for 1 more minute. Stir in squash pulp and set aside. 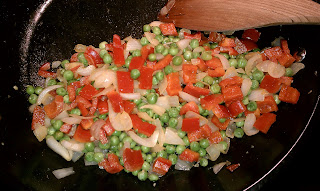 In a small bowl, combine tahini, soy sauce, sesame oil and water, stirring until well blended into a creamy sauce.  Stir into the spaghetti squash mixture and toss to combine.

Add the entire mixture into the greased dish.  Cover tightly with foil and bake for about 20 minutes. Top with sesame seeds. 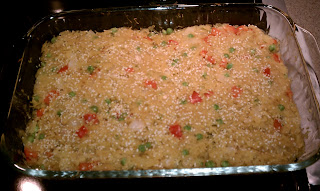