For some strange reason, all the eggs we've been buying lately have been IMPOSSIBLE to peel when we hard boil them.  I have no idea why.  I've heard fresh eggs can be harder to peel, so I've been buying a carton and waiting a week until I hard boil them, and it's still too difficult.  I've tried bringing the eggs up to room temperature before boiling them.  Adding baking soda to the water.  Peeling them right after cooking. Peeling them the next day.  Nothing is working!

I decided to give up on the hard boiled egg quest and go a different route.  My solution was a crustless quiche.  I've found you really don't need the crust.  It's easier and healthier.  You can change the vegetables in this recipe to whatever you have on hand or prefer, so it's quite versatile.  I've used any combination of red peppers, sundried tomatoes, cherry tomatoes, spinach or onions.

Another thing I did with this recipe that's different than most quiches is to separate the eggs and whip up the whites.  I read a tip a while ago about beating eggs whites in any dish that calls for eggs to make for a fluffier end product.  I do think it makes for a nice consistency with the quiche.  I don't think I'd make another quiche without taking the extra step of whipping up the whites.  It makes a world of difference! 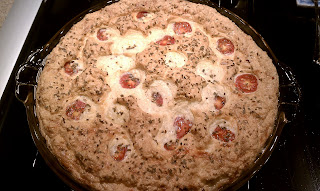 Pre-heat the oven to 375 degrees. Lightly oil a 9-inch glass pie plate.
Heat cooking oil of choice in a pan and add vegetables.  Cook for about 5 minutes, until tender.
Layer the cooked vegetables in the bottom of the pie plate. 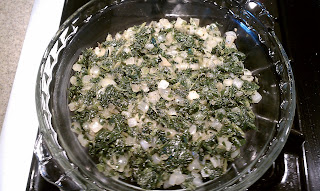 Separate the 4 eggs, putting the yolks in a large mixing bowl (yes, I know my yolks are in a small bowl in this picture.  I guess I like to dirty as many dishes as possible when cooking...) and the whites in a medium bowl.  Beat the whites until stiff peaks form and the consistency is like whipped cream. 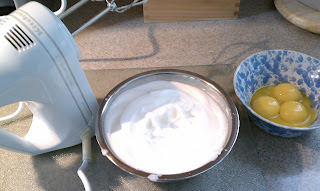 In the large mixing bowl, use a fork to beat the eggs yolks with the milk, and add a pinch of nutmeg.  Add in the shredded cheese.  Fold in the beaten eggs whites to the yolk and milk mixture.  Spread the egg mixture all over the veggies in the pie plate.  The egg mixture will be extremely fluffy! 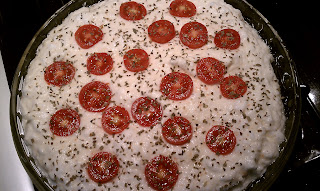 Set on a wire rack to cool for five minutes before serving. This allows the pie to settle, and makes it easier to slice and serve.